At The Blenders Pride Fashion Tour 2011

Blenders Pride Fashion Tour kicked off in Kolkata, India on September 10th and the fashion event saw Bollywood actress Priyanka Chopra walk down the runway who is the brand ambassador of Blenders Pride Fashion Tour 2011. The prolific actress attended a press event and walked the ramp for ace fashion designer Neeta Lulla. She walked down the ramp in a white lace mermaid skirt, a long sleeve lace blouse and a draped lace dupatta. The actress accessorised the look with statement chandelier earrings and a matching ring and a diamond band. Needless to say, she looks exotic. 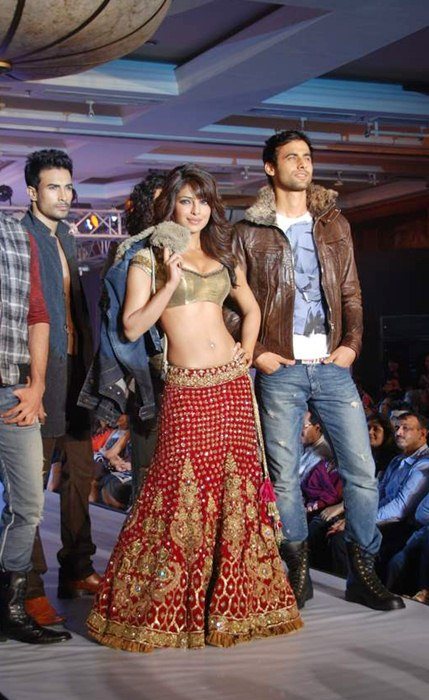 Priyanka Chopra took to the ramp at the 3rd Rock Fashion Fiesta in style. The show was organized by the DHL and the dresses were designed by ace designer Manish Malhotra. Sporting a red lehenga with golden blouse that flaunted her sensual midriff, PC made sure that the limelight was on her.

At The Lakme Fashion Week 2014

At The Lakme Fashion Week Summer/Resort 2013 Day 1 of LFW Summer/Resort 2013 ended on a grand note with famed designer Manish Malhotra putting on a stellar show with Bollywood actress Priyanka Chopra as the showstopper. Ruling the runway in a gorgeous lime green sari paired with a dove grey strappy blouse, the former beauty queen was looked at by everyone with sheep’s eyes. The sari boasted a delicate sequinned border and a slash of fuchsia across the border of the pallu. With her tresses swept sideways and lips flushed in light pink, the look was prepossessing to say the least.

At The Lakem Fashion Week 2013

The sensuous Priyanka Chopra walked the ramp for Bisou Bisou by Reliance Jewels on Day 5 of the Lakme Fashion Week W/F 2013. Looking sizzling in a one shoulder black top, which was well fitted from the waist, and black pants, she sported contemporary earrings to match her outfit. To me, this would be the best pick out of the lot 🙂

So my favorite was this last one at LFW 2013. Which one did you like most among the Best Showstopper Looks of Priyanka Chopra? Can’t wait to hear 🙂